Have you ever come across wild monkeys during your walks with your doggie? As residents of Singapore, most of us probably are not unfamiliar with the sight of wild monkeys. I grew up jogging near Bukit Timah Nature Reserve, and now walk my 6 month old puppy, Mako, near Labrador Park frequently, so these monkeys are definitely a common sight to me.

However, most of us also know these monkeys are not to be trifled with. I was taught to never have food or plastic bags in my hands around these monkeys, to never feed them, and to avoid eye contact with them. I always kept my distance as much as I could. I like monkeys – in theory – I think they are adorable. Unfortunately, a terrifying encounter with them has definitely left me more apprehensive about them.

My mother and I wanted to take Mako to the West Coast Park dog run. Mako has never been to a dog run, and I really wanted him to have that experience as he is really social. We were really excited!

We drove there, parked at Carpark 1, and then I grabbed Mako’s leash to walk as we headed in the direction of the dog run. It was a large wide pedestrian path surrounded by grass and nature. My mother then realised she had left her phone in the car, and told us to go on ahead while she went to retrieve it.

Mako and I walked on, and I kept his leash short and had him walk close to me as it was a new environment. From a distance, I saw a monkey family! There was a mother, a father and tiny little baby! I remember thinking, how cute! They were on the far side of the same path we were on, so we just continued walking in their direction. I didn’t think it’d be a problem as long as I didn’t make eye contact and gave them enough space. Mako is not the aggressive type either so I figured he wouldn’t chase the monkeys. It was around this moment where my mother almost caught up to me and Mako.

Mako, as is his habit, stopped and turned around to wait for my mother to catch up. He always does this on his regular walks, waiting for my family members who are behind. I followed him and turned to look for my mother too. This was a big mistake.

I got a shock when I looked down and saw the monkey family on the path running up to Mako. The father had reached Mako by the time I realised they were approaching. I was horrified and tried to pull him away. In the past when Mako and I encountered monkeys at Labrador Park, I’d carry him and walk away quickly. However, I was too slow because even as I pulled Mako away, the monkey had reached out and clawed him. I was in shock and didn’t even realise what happened until I saw a huge, red, bleeding gash on Mako’s right hind leg. I mentally froze and all I wanted to do was protect Mako. My mother, the hero of the day, saw everything and came up running and screaming at the monkeys, chasing them away.

The gash was huge and bleeding. I was terrified his wound could be infected with the filth from the monkey’s claws. The poor boy did not fight back at all. Not a bark, a cry, a growl, or a whine. I picked him up, all 15+ kg of him and carried him about 300m to the car.

Rushing To The Vet

We rushed him over the Gentle Oak Veterinary Clinic as it was nearby (GO also happens to be Mako’s regular vet). We didn’t have an appointment, so I called them, trying to contain my panic and hysteria.

“My dog got attacked by a monkey, can I bring him in right now?! I’m 10 minutes away”. I was crying by this point as I was so worried. I didn’t know whether he would be okay, and I felt so awful for not protecting him. In my head, I wish I had picked him up. I wished I had shielded him. I wished I was the one injured and not him. What if he got infected? What if he lost his leg? Why was I such a terrible owner? The awful thoughts wouldn’t stop coming. The entire journey felt like the longest in my life.

However, Mako is such a blessing. I was crying, and failing to be calm and strong for him. The sweet, darling boy, despite his huge wound, lay on me and kept licking my hands. He tried to lick his wound but I covered it with my hand to stop him. Imagine, he was wounded yet he was comforting me!

I rushed into Gentle Oak, carrying him, crying and literally covered in his blood because it had gotten all over my hands and arms. The staff at Gentle Oak were calm and kind, and swiftly took him in for emergency treatment while I sat in the waiting room trying to calm down. Thank you Dr Travis and GO team for taking amazing care of Mako! They gave him local anaesthetic, various injections to guard against infections and viruses, and also cleaned and stitched the wound. Mako emerged from the treatment room slightly groggy but otherwise calm.

Mako had to wear a cone for 2 weeks so that he would not rip out his stitches or lick them. He HATED the plastic cone. The first night back, he trembled whenever the cone was on, and walked backward the first entire night. The next day, Horlick @horlicksiewdai gifted me their old soft cone and Mako loved it waaaaaay better! Thank you Horlick!

I had to clean his wound 2 to 3 times a day with antibacterial wash and antiseptic. He could go on walks, but he could not play with his friends nor take a bath. During the first few wound cleanings, I was still wiping up so much blood every time. I had to check constantly for any signs of pus, oozing, or any indication the wound was not healing well. Mako took a couple of days to regain his regular appetite, but within 2 days he was back to his normal playful self! I updated Mako’s trainer via WhatsApp, and here is what he said:

“Mako is still young, and he will absorb like a sponge. He will take this as a correction from the monkeys but he will be okay in the future.”

And that is true. A week and a half later, I saw some monkeys again at Labrador Park, and Mako saw them before I did. He did not react excessively, but was a little more guarded than usual. However, he took cue from me and stayed calm, and we just walked away, and it was like nothing happened.

This entire experience was really awful, but I learned a good amount of things from it that I wish to use this space to share, in the hopes you all find it helpful too.

You never know when an emergency can happen. Thankfully, we had the car nearby, and I was not alone. My mum drove us to the vet. Here are some tips I have gathered for being ready to handle an emergency, and hope this is useful for first time pet owners like me.

The biggest what-if I had to deal with was this: What if I had just picked him up and protected him? Then none of this would have happened? Well, I discussed this with Mako’s trainer, and he shared with me many tips about monkeys I never knew, including the fact that picking up Mako would have been a terrible idea. So, in this portion, I want to share with you tips on dealing with wild monkeys so you all don’t end in a situation like we did!

What To Do When Encountering Wild Monkeys

Not everyone may agree with this, but I am just going to share the tips Mako’s trainer (who is really knowledgeable about animals in general) shared with me, as well as a some other things I have learned.

And that sums up my first pet emergency with Mako. It was scary, and we learned a lot, and I hope this post has been helpful in helping you learn abou what to do in an emergency, and ESPECIALLY how to deal with wild monkeys to keep your doggie safe! Please let us know your thoughts in the comments below, and thank you to everyone who supported Mako with thoughts and love during his recovery. He now has his stitches out and has healed very well! Hope this was useful! 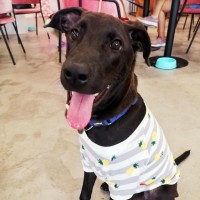 Hi! I'm Mako. I was named after the voice actor Mako Iwamatsu, who voices Uncle Iroh on "Avatar: The Last Airbender". It is my mama's favourite show and Iroh is her favourite character for his wisdom and humour.

I'm a Singapore Special! I was rescued at 2.5 months old and adopted to my furever home at 3 months old. I was a really skittish and shy puppy, but with lots of love, encouragement and pampering, I'm coming out of my shell as a super social butterfly and really manja baby. Please consider adopt don't shop! There are many lives like mine in need of a loving home, please give them a chance.

Will gib big kiss for treatos

Why do we use e-collar on Porkchop