Katsu has always been the lively kid in the neighborhood. He enjoys zoomies every night and after showers. Not forgetting the daily routine of jumping on hoomans at home and playing fetch every other hour to burn off his excess energy. However, reality struck us one month after his first birthday.

A month before his first birthday, we brought him to our usual vet to check on his food allergy issues, and our usual vet, Dr Jan, suspected that he has Grade 2 Patellar Luxation on both his hind legs. She mentioned to introduce him supplements to strengthen his joints and bring him to swimming regularly, which we began incorporating into his diet routine. We introduced him to swimming at Wag n Wild and also fed him Rose Hip Vital daily. Fast forward to a month after his birthday, he was bitten by a dog on his testicles so we went to the vet again. (Poor boy) This time, Dr Jan diagnosed him with Grade 2-3 on his left hind leg and mentioned his right hind leg has improved to a Grade 1.

However, despite efforts in bringing him to swimming regularly and discouraging him from jumping at home, our efforts were to no avail. He starting kicking his leg as if his ears were itchy, but his legs were not reaching his ears. Instead it was kicking in a circular motion as if he was trying to manually ‘shift’ back his dislocated joint and he constantly does that when he is walking or hopping on one leg.

We were so terrified and decided to visit Rehab Vet for a consultation. Reason why we chose Rehab vet is because of Hana’s (@hanathecloud) recommendation. She, too, suffers from patellar luxation and hip dysplasia hence is able to relate to our concerns.

How the visit went

We were greeted by really friendly staffs and vets! Judging from how gentle they were with Katsu and how he reacted towards them, I’m really grateful that we gave this place a visit as he is usually wary to strangers. We were assisted by Dr Janny and I dare say she is one of the most gentle vet I have ever encountered with.

First Assessment – We were told to leash him and they will record some videos and assess on how his hind legs look when he is walking slowly and running. For Katsu’s case, the Dr Janny mentioned that his legs were spread open with an abnormal distance between and he was tip-toeing instead of putting his whole feet on the ground.

Second Assessment – He was then placed on a stance analyzer to measure how much weight is being beared on each of his paws and legs. As a general guide, a dog with healthy limbs and joints should have 30% weight beared on their front legs and 20% weight on their hind legs.

Here are Katsu’s results as shown:

Answer: As his left leg has no strength, he is overcompensating by using his right leg more. This resulted in his right leg not being to withstand this extra amount of weight, which led to muscle loss eventually. If this continues, his right leg will be the first to lose all mobility and it will happen next to the left.

Third Assessment – He was told to lie down on the side and Dr Janny tried to measure the length and girth of his hind legs, as well as the flexibility. It was mentioned that Katsu’s legs were not able to bend as much as a normal puppy’s. The minimum degree is at least 160, and he is only able to bend it to 150. When she tried to straighten his hind legs, she could feel his muscle getting really tense and he is able to stretch his leg straight fully which should not be the case. After consolidating the results for all the assessments, Dr Janny laid out 2 options for us – Which is either going for a surgery for his hind legs, or either rehabilitation. We were against the idea of Katsu going under the knife as he is very young, and Dr Janny mentioned that a surgery only has 30-40% success rate. At that moment, our decision was final.

Final Results – Dr Jan was right. Dr Janny diagnosed Katsu with a Grade 3 Patellar Luxation on his left hind leg and Grade 1 on the right. We were told to touch his thigh and the muscle beside the patellar, and we could feel that the patellar’s muscle was exceptionally thin. What the patellar’s muscle does is that it helps to lock the joints together. If it is not well developed, the joints will shift as the muscle is not thick enough to ‘lock’ the joints in place as it should be. We were advised to engage in rehabilitation with activities such as Hydrotherapy, as well as land exercises to make sure he doesn’t lose his stamina. (Do take note that the activities or therapy will vary based on the age of your dog or severity of the issue!)

We will have to continue rehab before he turns 1.5 years old, as it is the time where their bones and muscles will fully develop. With that being said, we have since engaged in their services and will start the first session soon! We will do a follow up on this blog post again after his first 10 sessions.

Genetics – Dr Janny mentioned that his Patellar Luxation is passed down from his parents. We still remember asking the pet shop about the health of his parents before purchasing him, and they told us verbally they were healthy without showing any proof. This just shows how unethical they are.

Running/Jumping – When he was 3 to 8 months old, we would constantly play fetch at home with him. He would also get uncontrollably excited whenever someone comes home, which resulted in him jumping alot. As our floor is slippery, it might have worsen his patellar issues.

Weird sitting postures – Katsu sat like any other normal dogs when we first bought him. He only started sitting in a weird position whereby his hind legs were facing the side when he was 7 months old.

Kicking of hind legs – As mentioned previously, he is constantly kicking his hind legs towards the front as if he was trying to kick his joint back into place. Which looks somewhat like this but his legs were not reaching for his ears:

Running – He bunny hops when he runs. If he sprints, both of his legs will barely touch the ground and dangle in midair, meaning that he uses both his front legs to support most of the weight when he is trying to pick up speed.

And… tada! We hope this article has provided you with some insights such as symptoms, causes and what to expect when you visit a rehabilitation centre! With that being said, please don’t shy away from any possible symptoms that your dog is showing, especially if they start limping. Visit a bone specialist and get their limbs checked, at least you will have a peace of mind. It is no doubt that rehabilitation and vet fees will cost a bomb. With me and my sister both being students, it is getting extremely tough on our finances. Nevertheless, we only want the best for Katsu, and we know you feel the same about your puppers too! 😀 Please feel free to DM us on Instagram if you guys have any doubts! Patellar Luxation is very common in dogs and it is NOT a problem to be treated lightly with.

Adios Amigos~ See you next time~ 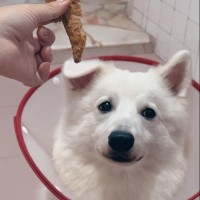 Henlo! I am Katsu and I live in the West side of Sunny Singapore :D
Extremely food motivated individual, I will do anything for kanga treatos! Let's play together someday~

Should You Let Your Dog Join You in Bed?

How to Train Your Puppy to Go on Potty Pads