May the story of Yumi bring you the positivity and strength you need to get you through the most difficult and tiring of times.

Meet Yumi, the strongest and cutest fatty adopted from China. It was his Gotcha Day recently so I finally got some time to sit down and write his story, about how he overcame all odds and came out a happy little warrior despite all he has faced.

From the Streets to the Sheets

Yumi is the only dog in our house that wants to sleep with humans. The poodles like to sleep by themselves in their crates or on their own beds, but Yumi will always want to climb onto our bed and plop his fluffy butt against me and sleep. No matter how I sleep, he will always make sure to have one part of his body touching me. When he sleeps on my bed by himself in the morning after I wake up, he will move up onto my pillow and sleep on that instead. While it may not seem like it, Yumi is actually a very needy dog, that craves the constant accompany of us.

Yumi was rescued from the streets of Shanghai, China, and when he was found he was in extremely bad condition. He was found covered in fleas and ticks (suggesting he has been on the streets for a very long time), starving badly to the point where you could see his bones, his teeth were mostly gone, his legs were all injured resulting in him not being able to walk normally and most scarily, he had two big burn marks on his back.

No one knew where he came from and what has happened to him. Was he abandoned? Did he run away from his previous home? Was he a lost dog who never found his owner? All we knew was that we had a badly injured dog that needed to be taken care of.

The vet said that Yumi’s had suffered 4th-degree burns, and he could never be able to recover in those areas. After all, it was literally “griddled” and the skin felt like a piece of plastic that was completely rid of any fur.

My mother spent about 6 months nursing him back to health while arranging for his immigration to Singapore. On 29 August 2016, he was brought to Singapore to start his new life. He was finally allowed to go home on 27 September 2016 after clearing quarantine.

Bringing him to the vet confirmed all our suspicions about his legs, Yumi had Grade 4 luxating patella in both knees and his front paws had healed at the wrong angle after being broken (probably due to the lack of medical care when he was stray). What we were told was that we had to be prepared for arthritis to take a toll on him once it sets in. We also had to be super careful about not worsening his conditions.

Aggression and How We Dealt With It

Being a previously abused dog, Yumi inevitably had signs of aggression. He has specific triggers which set him off, causing him to go into a panic and snap at whoever is near him. However, it was through his reactions that helped us to determine his triggers and slowly mitigate his fear.

For example, he does not like any form of sticks, be it long or short. As long as he sees a stick, he will run away and bark fiercely at it after finding a secure spot that protects his body. We try to have him get used to it slowly and help him to understand that not all sticks are a threat to him, but it’s not been an easy process. Unfortunately, some fear is just super-strongly ingrained, and there’s minimal which can be done to make him no longer fear it. But thankfully, our efforts did pay off slightly, as he is now relatively calm with a few items, and can be relaxed even beside them.

In addition, probably as an effect of his days of being a stray dog, Yumi resource guards. He does not allow others near him when he is eating and used to give off warning growls when we approach him during meal times. Thankfully, after years of coaxing, he is now able to eat beside the other dogs without worries and is even willing to share with Yuzu sometimes.

Despite the adversaries he has faced, Yumi is still always a happy and cheerful dog, and is always happy to meet new friends where he goes. We know that he isn’t young anymore, but he always exhibits puppy-like behaviour with his excitement and curiosity. He is very protective of his family and does not allow anyone to threaten us (human or dog). If the humans got into a fight, he will come in the middle to break up the fight (forever the peacekeeper of the family).

Despite being abused, he does not let his past demons stop him from being friendly with people. He is still quick to warm up to people and is absolutely loyal and loving to the very core. In fact, he won the hearts of all the staff at the quarantine office in his 30 days because of how loving he was towards him. No matter where he is, he always has fun.

What I’ve learnt from Yumi is that no matter what happens, always stay happy. Despite having so many injuries on his body, he is still smiling and having fun every single day. He never lets his trauma deprive him of his happiness every day, and continues running around despite his joints aching.

I recall once seeing him at a dog party when he was running with some Spitz when he suddenly just buckled and fell to the ground. I panicked and was about to run over to pick him up when he just got up and continued running around with the other dogs happily. I was worried, and still am constantly worried about his joints, but I never want to deprive him of his happiness and interactions with other dogs. All I can do is to do it in a controlled environment, where he can safely play without getting injured.

A funny story about Yumi which I just remembered. I once thought he went missing at a pet cafe. One second he was running around and the next he disappeared. I kept calling for him and went around looking for a tiny white Pomeranian before suddenly hearing the party beside us ask me “Is this your dog?” while pointing to the fat little Yumi who was hiding among a bunch of Samoyed, stealing some of the birthday cake from that party… He just invited himself into the party and the Samoyed accepted him. *speechless* Cut the story short, he ended up celebrating the birthday for the Samoyed and was even in their group photo lol.

Nowadays, Yumi is getting older and is no longer as puppy like or moves as much as he used to. He still has random bouts of energy but he no longer keeps up with the other dogs. It’s a truth we have to accept, that our pets will grow old and eventually leave us one day. But until that day comes, I will make sure that Yumi lives everyday of his life happy and loved.

Just to add:
Please do support adoptive causes and adopt instead of buying if possible. Put a smile on a dog’s face, and allow him to feel happy and have a home again. If you wish to buy a dog, please do make sure you’re purchasing from an ethical breeder, not a pet shop or puppy mill. A pet is for forever.

For more adorable Yumi photos, check out his Instagram at @yu.mi.zu 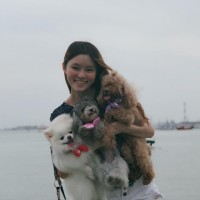 Hi, I am Yi Jie, the owner of 3 adorable dogs - Yuyu, Yumi & Yuzu (@yu.mi.zu). Look forward to in-depth analysis of different aspects of pet ownership from us!

Essentials for your first adventure!