Our experience with entropion (cherry eye)

This is Milky, our 1 year Chow Chow coming back from Pet Expo 2019. We would celebrate his 1st birthday on 23rd July, and continue to gush over his mini eyes, not knowing that it’s the start of something more.

Milky started tearing a lot. His tear stains got really bad and he started barking at empty spaces (especially at night). He had always have had tear stains but it always got better after we applied eye drops – but this time, it was different.

Eventually, we brought him to a clinic near our office at Clementi area and things just spiral down from there.

2. THE START OF A NIGHTMARE

I remembered talking to 3 different doctors from the same clinic – and realised that 2 of them couldn’t manage Milky for the eye-drop test in any way.

Yes, he struggled A LOT. The female doctors & nurses aren’t able to handle him – so case in point: if your dog is big, consider looking for a male doctor or an experienced doctor who can handle big breeds.

Luckily, Milky is not aggressive at all so he didn’t try to bite. He was just really scared because they needed to drop yellow solution into his eye and check the extent of entropion through a microscopic medical tool.

Eventually, Milky was diagnosed with entropion and needed a surgery. To put it in simple terms – Milky’s eyelid has so much folds that it started to curl in and caused his eyelashes to poke at his eyeball 24/7. The constant poke caused abrasion on his eyeball and caused his eyesight to worsen (explaining the barking) because he thought that there was someone there, but most likely it was just the blurry eyesight that confused him.

We scheduled the surgery; and off he went.

The surgery took a day, and we came to pick him up thereafter. Look at his REALLY puffy eyes!

It is worth noting here that Chows Chows have a thin windpipe and drools a lot – because of that, their risk of dying during a surgery due to GA increases with age and frequency. This was from another doctor (not from the same clinic)

The doctor who did the operation was honest – he told us that he is a general surgeon and not a specialist when it comes to eye surgeries like these. He was very assuring and empathetic (which I really like), but the surgery didn’t go well and was in fact, not a successful one.

We thought that everything was over and things are all good; fast forward 3 weeks – his eye got worst.

4. THE MOST DISAPPOINTING VET

We went back to the clinic and asked – what’s going on? The doctor who did the surgery wasn’t on-duty, and it was a Japanese doctor who attended to us. It was pretty bad (not her), but in the sense that she didn’t really know what was going on and I can’t really understand her accent.

There were a lot of Huh? and Why? and eventually, she referred us to another hospital – let’s call it V.

I had the WORST experience at V.

At this point, I just want to make it very clear that this is my personal experience and doesn’t represent the views of the general public. But I believe as a paying customer, I reserve the rights to share my own thoughts and opinion. This is my rights as a consumer.

I remembered it was a Saturday when I brought Milky over to the hospital (9pm+) and the said doctor known to be an eye specialist wasn’t around. I have an important family lunch the next day that clashed with the doctor’s only availability (2pm+).

Eventually, we decided to board Milky at the hospital for 1 night and let the doctor check on his eye the next day. I would then head over to the hospital to catch up with the doctor after my lunch.

And that is the start of the most disappointing conversation with said vet. I reached the hospital at around 3pm+, and the vet was free to have a quick chat.

👨🏻‍⚕️: “Milky has entropion and need another surgery. The cost will be around $4K+.”

🙎🏻‍♀️: “But he just had his surgery 3 weeks ago – why would he need another surgery?”

👨🏻‍⚕️: “I don’t know, I didn’t do the surgery. He will need another eye surgery and I am available earliest next week”

I was livid; and got very emotional. What do you mean “I don’t know, I did not do the surgery?” My POV is that as a doctor, I would have expected at least a breakdown of

No, he simply told me that HE DIDN’T KNOW and walked off when the conversation ended.

The entire process took less than 24 hours. I boarded Milky 9pm+ and brought him home the next day at 3pm+.

At this point – I was distraught. I called the surgeon and told him about the really bad experience I’ve had with V and said doctor. I wasn’t confident to let a doctor who dismissed a patient with “I didn’t do the surgery” to touch Milky.

He apologised for the failed surgery, and also for the bad experience I had. He was again, very empathetic and I really like that because I felt like a worried mum and his assuring (tone) helped make things much better.

He recommended Dr Heng from Mt.Pleasant, who is the only other doctor who is known for eye surgery in Singapore. It was also at this time that the other Chow Chow owners on Instagram knew about my situation and invited me into a WhatsApp group with over-pouring love, care and help.

I don’t have any photos of Milky going for his corrective surgery, but I must say it was a great experience with Dr Heng. She knew what she was doing, and the total cost came to about $1.6K for 1 eye.

FUN FACT – Mt Pleasant operates as a franchise so whilst they share the same brand name, each outlet runs differently. Reason is because we were initially not comfortable with Mt Pleasant due to a bad experience.

Dr Heng mentioned that Milky has a 75% chance of going blind in his left eye if we did not proceed with the corrective surgery. But even then, there were doubts like “Well, doctors would always be pro-surgery cause it’s more income”; and i think it was just a very stressful period for us because information is not exactly readily available.

Everything became much clearer only after we joined the CHOW CHOW WhatsApp group and got the advice from all the owners who have done the surgery with their furkids before.

We also wondered if we should have bought pet insurance for Milky (Aon, Happy Tails do cover cherry eyes) but alas, it would only take into effect 1 year into purchase so we wouldn’t be able to claim anyways.

Through this episode, I really started to appreciate the power of a community and seek to replicate that via Woof Agency & Pawjourr.

We are still building this ecosystem as we speak, but it’s very important to me that pet owners do not need to be alone when they navigate through pet ownership.

If you have any questions relating to entropion, please feel free to email me at Jane@thewoofagency.com. I am no expert but would be more than happy to share what I know 🙂 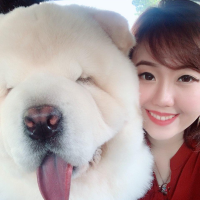 I hope that through this community, I am able to share my personal experience & stories to help other pet parents feel less lonely navigating the pet journey.

If you have any questions, feel free to ping me at jane@thewoofagency.com!

Raising Your Puppy: 6 Tips To Help With Housetraining

Review of KONG Toys: The good and the meh