Disclaimer: I am not a professional. This article is written based on personal experience and what I wish I knew before getting a second dog.

Let’s break this down for you, there are essentially four parts – Living with two dogs: the advantages, What to think about before getting another dog, Introducing the dogs, What does the dog owner need to do.

Are you spending your life with a dog and are you about to get a second one? It’s the best decision ever, both for you and for both dogs. Of course, adding a new pet into the family can be easier said than done, but you just need to find a way for the two dogs to live in the same house together. Here are our tips!

Living with two dogs – the advantages

Why is two better than one? Having another dog will bring an extra dimension to your life – first of all, two dogs keep each other company when you’re out, they can play and do activities that we humans are not able to appreciate and they can communicate objectively in their own language.

But for us, too, it means getting twice as much affection and making a lot of laughter.

What to think about before getting another dog

At first, a new arrival might cause a bit of trouble with the dog you already have, so it’s really important to take a few things into account:

Let’s assume that you’re having a opposite gender dog to the one you already have; that way, you will have to prevent certain issues. Make sure you spay them, otherwise you’re not going to end up with two litters of puppies every year. Two females generally get along well, but watch out for short tempers when they’re on heat.

Don’t bring a puppy into a home with an older dog as the pup will be bursting with energy, wanting to play just when the older dog wants to rest and be left alone. Instead, it’s the best to adopt a puppy if you have an adult dog (or another puppy of the same age) to avoid them competing over toys.

Some breeds are more territorial and possessive, while others are more ready to accept control or instruction and tend not to create conflict. The first sort would find it very difficult to share their rooms, toys and owners with another dog, and would really not welcome the arrival of a second dog. Its better to get a new set of things for your new pet.

Before bringing the new dog home, it’s always a good idea to let them meet in a “neutral” place that neither of them knows, such as a park. This is going to give the two pets some time to get to know each other to peacefully play. When going home, the first dog won’t feel threatened or lose its place. The human has to make sure the new arrival doesn’t upset our first pet.

What does the dog owner need to do

Make sure to keep paying the same attention to your first pet as before, so that it doesn’t feel suspicious; if the two dogs fight, don’t pay more attention to the little one just because it’s more vulnerable, or yell at the older one, or they feel like they’re losing their place as the pack leader.

Another tip is to pay attention to the small everyday things that are really important to Rover.

It really doesn’t take much to get two dogs to live happily in the same house. 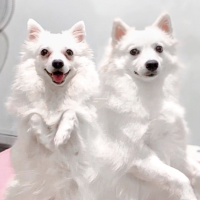 Hi, I am Iris, owner of 2 adorable dogs - snowy & bella (@snowyxbella). Let's see what personal experiences or tips I can share! :)