What we thought was just a simple cough/cold

Symptoms, diagnosis, treatment
*We are no expert, just sharing our journey*

Cough can mean a lot of things; kennel cough, lung problems, heartworm, etc. Can’t be sure what the root cause is unless seeking help from professionals.

Dusty started with what doesn’t sound like a cough in 2020 mid-December. It sounded like he was trying to exhale out deep from his lung with like a mini bark (sort of like sighing and barking). He only does that when he wanted to bark/is agitated/excited. So we thought it was him trying to express his emotions but in a different way??

After ~3weeks, the cough got more frequent and slowly started sounding like hacking coughs. Within ~2 weeks, it got worst and after cough, it always ends with him retching.

That’s when we felt that something wasn’t right.

Went for a vet visit, did X-ray, and found that his lungs were cloudy. No heart murmur was heard, heart looks normal, just 2 fade white spots that can’t conclude or tell what exactly it was. We were given doxycycline and theophylline to help open his airway. But sadly he still cough and 2weeks later a follow-up was done and showed no improvements, which meant that it wasn’t pneumonia/bronchitis.

A new medication was given, furosemide (water drawing med), which helps to release water in his body and he sure did pee a lot! Good news! It helps to reduce his cough but that also means that it might be the heart that has been causing the build-up of fluid. An echo was then suggested to check on his heart.

Indeed, after the echo, Dr came up with some conclusion:
Stage C CCVHD
Suspected DCM
No pulmonary hypertension

He will be on lifetime medication, pimobendan to be taken daily as well as furosemide when the cough gets worse. Medication will be adjusted on how well his body is reacting to it as we monitor his progression and with follow-up echos (1month from the 1st and following once every 3-6 months).

Currently, we are also adding in grain inclusive kibble in his meals to help counter the suspected DCM, which could be diet-associated that has been causing the weakening of the heart muscles. Eventually with careful diet, exercise and medication we hope to help him live more happily and comfortably.

What to take note/I realized or notice

We have to pay more attention to his breathing rate when he’s at rest to make sure his heart isn’t overworking (If it is, probably need to adjust med), Coughing frequency (if it got worst or not), he might lose appetite just have to take note of that too, making sure to not overload him with too much walk.

After the diagnosis then I became more attentive to what are the little things that changed. Thinking of it I realized, in the past sometimes he would suddenly stand up from his nap/from resting and started panting. But when he goes back to sleep/lies down he stops panting.

Now that he eats treats/chew that requires more work to bite he would pant afterward.

Would appreciate it if you could share with us any similar experience you have and what we can do to help make a dog with heart disease live more comfortably. THANK YOU! 🙂 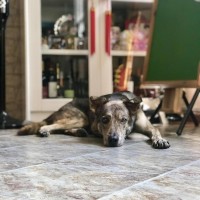 8yo still learning how to dog domestically

Adoption, Dogs, Stories From the CommunityOctober 8, 2020